“Mo-om, these pants have a hole in them.”

Since the start of school Biff and Bash have put holes in three hats, five pairs of pants, two pairs of snow pants, six socks, and one snow boot. Hell, Biff still  has a hole in his smile. 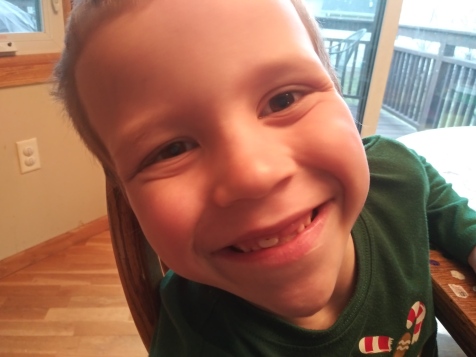 It’s only taken, oh, EIGHT MONTHS for just one front tooth to show up.

The holes in the new Star Wars hat were particularly impressive. “What was he doing, growing horns?” said Bo when I showed him. Biff can only shrug as he kneels with his cars, the knees of these jeans already threadbare.

Unlike my grandmother, I am no seamstress. Better to find a pair of jeans at the thrift store for a couple of dollars than to poke my fingertips with a needle…