Another wonderful read which I’m honoured to share it here especially, it remembered me on a song by Moody Blues, one of my favourite music band in 70’s, the song named Om.  With grateful Thanks ❤ ❤ 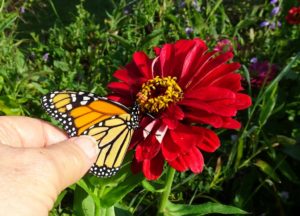 When I wake up each morning, I head for the back porch to check the Monarch nursery. First thing. Who will hatch today? Does anyone need a fresh milkweed leaf? Who became a chrysalis overnight? I feed the caterpillars before my dog and I eat breakfast.

Most of my thirty back porch Monarchs are in chrysalis stage as the days shorten. These will hatch by mid-September to join the fall migration. By summer’s end, I’ll have raised and released over 70 Monarchs.

Six caterpillars are tiny, carried home on milkweed leaves collected to feed the larger ones. The little ones munch milkweed in their own half-pint jars. Soon, I’ll transfer them to a mesh crate with milkweed cuttings so they can move and explore. Do they have time to become adult butterflies and join the migration? I don’t know but couldn’t resist trying. 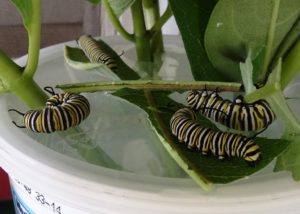 When I become this fascinated, I want to know why. Yes, they’re beautiful and mystical. The Greek word Psyche means both Soul and Butterfly. Yes, they’re threatened and an egg’s survival rate goes from 1-2% in the wild to 95% in my nursery. While it’s a pleasure to increase the Monarch population on my land, this passion feels deeper than that. 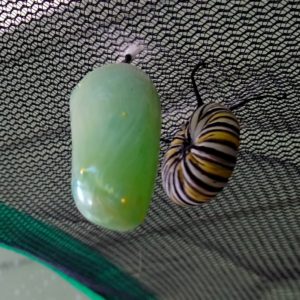 The Monarchs hold a Mystery, quiet proof of unending transformation.

Last week, frustrated with internet searches with inadequate references, I spent a few hours at the library. A helpful librarian and I didn’t come up with much. I know a university librarian willing to help. We’ll keep looking.

I asked a scholar for help. He connected me with Martha Ramirez Oropeza, a mural painter, author and researcher/lecturer of the Nahuatl pre-Hispanic codices of Mexico.

“Does the name I found online, Quetzalpapalotl, mean Monarch Butterfly?” I asked.

“No,” Martha said. I was afraid that’s what she’d say. The word has many interpretations, but refers to a moment of transformation or “precious regeneration,” not specifically a Monarch, but the “creative spirit that transforms and regenerates.”

I decided to return to Monarch geography, so looked up the Monarch Butterfly Biosphere Reserve, a World Heritage Site. It’s surprisingly small considering how many Monarchs winter there. The culture isn’t Aztec or Mayan, but Mazahuan with its own language and customs. The area is in the mountains northwest of Mexico City. Much of the habitat was destroyed, just as the conquerors destroyed the spiritual history of these people.

About to hatch (see Monarch wings        Two in the previous photo 10 minutes later, wings not fully

Fortunately, the invaders couldn’t destroy all indigenous spiritual connections. Like the Virgin of Guadalupe, some old sacred forms became part of the new.

Monarchs return to the Mazahua area of Mexico around November 1 when The Day of the Dead (Dia de Los Muertos or All Saint’s Day) is honoured in Mexican Catholicism. Monarchs float in by the hundreds of thousands to roost in trees for the winter after travelling 2000-3000 miles.

“The Mazahua believe that the souls of the departed return on the Day of the Dead in the form of monarch butterflies to enjoy the offerings of fruit and bread that are left on altars. To welcome them, they have a procession from the church to the cemetery and to bid them goodbye, they have a procession in the opposite direction.”  Mazahua Offering to the Dead set at the National Museum of Anthropology MNA, INAH. November 1, 2010.

It’s unlikely the Mesoamericans knew where the Monarchs went when they disappeared each spring. They didn’t know about milkweed, eggs, and caterpillars. The Monarchs appeared from the north as adults in autumn, stayed a few months, and then flew back north. We know they flew to Mexico from the northeastern United States and Canada over a two month period, but the Mazahua people must not have known that. I’m fascinated by a world where arriving Monarchs are honoured as dead relatives returning home for a visit 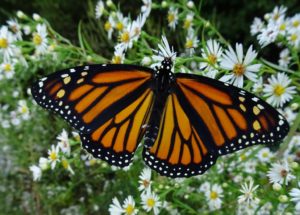 Raising Monarchs inspires me with hands-on contact with the Mystery of Transformation. When they’ve left for Mexico, I’ll dig for more ancient stories and see what I find.

Do you search for meaning in surprising fascinations? Thanks to Martha Ramirez Oropeza, co-author of The Toltec I-Ching, for sharing her knowledge with me. I’m also grateful to Tom Burns of Tompkins County Public Library for patiently searching with me. After I left the library, I realized I should search the geography of the Monarch Biopreserve and the people who lived there. For another post about Monarch butterflies, see Mothering Monarchs, Mothering My Soul. For a post about the Greek Goddess Psyche, see Clutched: An Essential Lesson from Psyche’s Fourth Labor.